Costa's Views on the Court 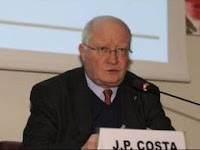 As announced, the Court formally opened its judicial year last Friday - a very special occasion, since the Court exists fifty years. Thus, it provided the oppportunity for the Court's president, Jean-Paul Costa, to look back in his speech at what the Court has achieved in those five decades. Of even greater interest are his remarks on the future. To keep the ship of the court afloat - and this has become a familiar theme - reform is needed.

With the reform Protocol 14 to the ECHR stranded in the Russian Duma until now (Russia being the last state whose ratification is needed) and the Report of the Wise Persons also partially in the air as a result, creative solutions are necessary. Thusfar (judicial) diplomacy has not seemed to yield results concerning the Russian stance. Thus the Court has come up with the idea - and this is what Costa announced in his speech - that in the first half of 2010 it would be good to have a major conference to "pump new life into this fifty-year-old by offering it a cure of youthfulness". The president indicated that such a conference could only have an impact if senior political figures would participate. Maybe the hope is that a gathering of heads of government or state or foreign ministers would engender a new esprit de corps in order to convince Russia to come along and to induce some countries with large amounts of violations to take both the prevention and the cure seriously on the national level. Let's sincerely hope that it will work!

In the meantime the Court is working in its daily practice to keep things going. Costa indicated that we can expect more prioritising of important and serious cases, more pilot judgments (!), and a push for more friendly settlements. The president also appealed to national lawyers to avoid futile or hopeless applications. I must say that I admire the sense of continuing pragmatism and forward-looking attitude of the president and all those working at the Court. Alhough there are many reasons to be pessimistic, they have continuously adopted a pragmatic stance vis-à-vis the many problems.

For those who want to watch a recording of the whole ceremony on webcast, take a look here.
Antoine Buyse
Share
‹
›
Home
View web version