From 19-22 April 2021, the Parliamentary Assembly of the Council of Europe (PACE) will meet to discuss a number of urgent issues.
The following items in the agenda are relevant for the the Convention system as a whole:
- The arrest and detention of Alexei Navalny in January 2021
- The functioning of democratic institutions in Turkey
- Covid passports or certificates: protection of fundamental rights and legal implications
- Armenian prisoners of war, other captives and displaced persons
- Covid-19 vaccination certificates: how to protect public health and human rights?
- Russian threat to the pursuit of peace in Europe
In addition, PACE will vote on the election of the judge in respect of Belgium. The three candidates in respect of Begium include Ms Maïté de Rue, Mr Frédéric Krenc, and Ms Sylvie Sarolea.
PACE will also discuss a number of other important topics, and will feature, among others, a speech by Angela Merkel, the chancellor of Germany.
PACE meeting starts today at 11:30, and will be streamed live here.
Geplaatst door Kushtrim Istrefi

New Book on European Consensus between Strategy and Principle

Jens T. Theilen has published with Nomos a book titled European Consensus between Strategy and Principle: The Uses of Vertically Comparative Legal Reasoning in Regional Human Rights Adjudication. The book is open access and can be downloaded for free here.

Here is a short abstract of the book:

'This study offers a critical account of the reasoning employed by the European Court of Human Rights, particularly its references to European consensus. Based on an in-depth analysis of the Court’s case-law against the backdrop of human rights theory, it will be of interest to both practitioners and theorists.

While European consensus is often understood as providing an objective benchmark within the Court’s reasoning, this study argues to the contrary that it forms part of the very structures of argument that render human rights law indeterminate. It suggests that foregrounding consensus and the Court’s legitimacy serves to entrench the status quo and puts forward novel ways of approaching human rights to enable social transformation.'

Webinar on the European Court of Human Rights: Navigating Turbulent Relationships with States 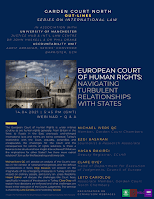 On 14 April 2021, the Garden Court North Chambers in association with the University of Manchester and the Accountability Unit are hosting a webinar on the European Court of Human Rights: Navigating Turbulent Relationships with States.

Here is the description and programme of the webinar provided by the organisers:

'This webinar will focus on the European Court of Human Rights, which is currently under intense scrutiny as are human rights generally. From Britain in the West to Russia in the East previously unchallenged international laws and norms are being contested. Turkey’s relationship with the Court, arguably, personifies and encapsulates the challenges for the Court and the consequences for victims of rights violations. Is there a balance to be struck and how might it be achieved? What are the implications for other States? Are there more radical solutions?

The webinar will be chaired by Leto Cariolou, Associate Member of Garden Court North Chambers and hosted by Işıl Aral from Manchester University’s International Law Centre who together with our panel of speakers will talk focus on the relationship between the European Court of Human Rights and Turkey. They will also address the Court’s response to the emergency measures adopted in Turkey following the coup of 15 July 2016 that tried to seize power and overthrow President Erdogan.

Michael Ivers QC – Barrister, Garden Court Chambers, London – will provide an analysis of the Court’s case law in the context of national emergencies and the difficult considerations it faces.

Ezgi Basaran – Journalist Radikal Newspaper; Research Associate, University of Oxford – will present on the magnitude of the emergency measures in Turkey, the impact of the measures on ordinary people and, in particular, on press freedoms.

Hasan Bakirci – Deputy Registrar, Section II, European Court of Human Rights – will discuss the challenges the Court faces and the particular difficulties in respect of the situation in Turkey today.

Clare Ovey – Head of Department of Execution of Judgments of the European Court of Human Rights, Council of Europe – will present on what happens after a judgment. How are decisions enforced and what challenges are faced in the execution of the Court’s judgments.'

ESIL & iCourts Conference on the European Court of Human Rights

And here is the full programme:

Professor Mikael Rask Madsen, Director of iCourts, Centre of Excellence for International Courts, University of Copenhagen, 'The Narrowing of the European Court of Human Rights: Legal Diplomacy, Situational Self-Restraint and the New Vision of the Court'

Dr Zena Prodromou, Senior Associate, Quinn Emanuel Urquhart & Sullivan LLP, 'The Influence of the ECHR on the Jurisprudence of International Courts and Tribunals Applying Exceptions Provisions for the Protection of the Public Order'

Dr Tamas Molnar, Legal Research Officer, EU Fundamental Rights Agency, 'The Impact of the ECtHR case-law on the CJEU interpreting the EU’s return acquis : more than what you first see ?'

Janja Simentić Popović, University of Belgrade, 'Patterns in the usage of the ECtHR Jurisprudence by the CJEU in the field of Asylum'

Dr Cristina Teleki, University of Bern, 'The European Court of Human Rights – Center Stage in the Conversation on Bigness?'

You can register here.