Opening of the Judicial Year 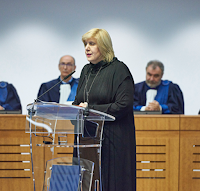 Last week, on 24 June, the formal opening of the judicial year of the European Court of Human Rights took place in Strasbourg. The dual event, slightly deferred due to the pandemic, started with a seminar for judges of Europe's highest courts on the apt topic of 'Human rights protection in the time of the pandemic: new challenges and new perspectives'
Subsequently a special ceremony, or solemn hearing, took place to open judicial year 2022. Speeches were held by the Court's President, Robert Spano, by the President of Greece, Katerina Sakellaropoulou, addressed representatives from the highest courts of the member States of the Council of Europe, and by Dunja Mijatović, the Council of Europe's Commissioner for Human Rights (see also the photo). Their respective speeches can be read by clicking on the hyperlinks over their names.
The Greek President reminded the audience of the special history of Greece vis-à-vis the Convention system, with the hiatus of the military regime. Court President Spano not only gave on overview of the Court's main judgments of the past year, but also issued a stark warning:
"A Europe in which the separation of powers has been eroded by those in power; A Europe where sustained public expressions of hostility or outright refusal to abide by court judgments are commonplace; A Europe where judges are simply unable to do their jobs independently and impartially for fear of reprisals or attacks resulting in unfettered governmental power: This is a Europe in which the rule of law is at risk of disappearing. This is a Europe in which we will no longer be free, as recent events have once again shown us."
The Commissioner, in turn, pointed to the erosion of the rule of law, called upon states to no longer procrastinate in implementing human rights obligations under the Convention, and emphasised that "member states should make better use of the tools of the Organisation to exert the necessary pressure to ensure respect for democracy, human rights and the rule of law by their peers."
Geplaatst door Antoine Buyse

Invoking Subsidiarity to Weaken ECHR Protection in the UK 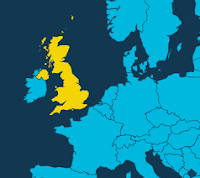