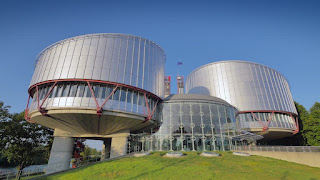 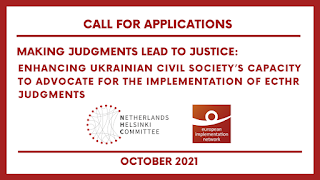 The ever-growing European Implementation Network, which recently welcomed more new members, together with The Netherlands Helsinki Committee, is organising a training about the implementation of judgments of the European Court of Human Rights in Ukraine in October. The event will either be held in Kiev on 26th and 27th October, or as an online training (decision to be taken early September about the final format). This is the information from the organisers:
'Applications for this training are now open. We specifically urge non-governmental organisations (NGOs), human rights defenders and human rights lawyers to participate in this event.
The size of the non-implementation problem is of concern in Ukraine, with 68% of leading ECtHR judgments from the last ten years still pending. Each leading case pending implementation reflects an unresolved and recurring human rights violation.
While pending judgments are high in Ukraine, they also provide opportunities to challenge the lack of progress in national legislative and judicial systems to tackle the policies and practices at the root of repeated violations.
NGOs play a critical role in the implementation process overseen by the Council of Europe’s Committee of Ministers (CM). NGOs can engage in the implementation process through Rule 9.2. of the Rules of the CM, where they can provide recommendations and critical information.
This training aims to equip NGOs with the knowledge of the CM judgment execution process and confidence to engage with advocacy tools to support the full and effective implementation of ECtHR judgments.
What will the training entail?
Presentations by EIN staff, Council of Europe secretariat, and civil society experts on how to engage effectively with the CM judgment execution process.
Sharing of lessons learned by whose have already engaged with the implementation process.
Group exercises on drafting Rule 9.2 submissions on a case currently pending before the CM.
Collaborative brainstorming sessions to unpack strategies for the implementation of pending cases.
Who is this training for?
The staff of NGOs working on, or planning to work on, implementation of ECtHR judgments cocnerning Ukraine;
Independent lawyers or HRDs supporting NGOs in these activities, or working in an independent capacity on these issues;
Staff from specialised organisations working on freedom of expression, intending to engage with the ECtHR judgment implementation process.
Attendees do not have to be based in Ukraine but must have a clear focus on Ukraine.'
The application form as well as information in Ukrainian is available on the EIN website. The event if free of charge. Application deadline: 16th September 2021
Geplaatst door Antoine Buyse

Webinar: ECHR and the Theoretical Crisis of Human Rights

On 2 and 3 September 2021, the Glasgow Centre for International Law and Security is hosting a research workshop 'The European Court of Human Rights and the Theoretical Crisis of Human Rights'.
Here is the description of the event prepared by the organisers:
It has become a commonplace to argue that human rights are in a state of crisis. This crisis does not only pertain to the social, legal, and political challenges to the protection of human rights, but also to the increased scepticism about the legitimacy, effectiveness, and functioning of the institutions which are called to protect them. As one of the leading human rights institutions in the world, the European Court of Human Rights (ECtHR) has not been immune to such criticisms. A range of actors and stake- holders – including legal scholars, judges, politicians, and the media – have questioned the very existence of the Court, targeted particular aspects of its institutional structure, and probed particular areas of the Court’s case law (and, sometimes, focused on only one adverse judgement, e.g. the Hirst case in the UK). These pressures have affected the law-making domain and have materialised in, for example, the explicit re-affirmation of the principle of subsidiarity and the margin of appreciation in Protocol 15. Yet, there is another strand of critique that pulls in the opposite direction: in academic and policy circles, it is common to criticise the Court of watering down the protection of human rights through its deferential doctrines and the lowest-denominator approach to human rights standards. In the view of many commentators and practitioners, the Court is not doing too much but, conversely, far too little.
This ambivalence is telling of a more fundamental, theoretical crisis: the crisis of the idea of human rights. The disagreement in the assessment of the Court and its role is often a consequence of different understandings of the nature and normative foundation. This workshop thus aims to address the pressing and under-explored issue of the theoretical crisis of human rights in the context of the European Court of Human Rights. It has two interconnected goals. First, it aims to contribute to a better understanding of the philosophical foundations of the ECHR.
The main purpose of the workshop is to investigate how the philosophy of human rights can help illuminate and address the crisis of human rights in the European context with a view to offering a philosophically-informed response to it. For example, the wide usage of consensus by the Court echoes the terms of the political conception of human rights in that it makes the content and scope of a right contingent upon social, institutional, inductively obtained, and distinctively European facts about human rights. Would the very idea of human rights be endangered if the Court were – under various pressures – to extend its consensus-based reasoning to wider areas of its case-law? Similarly, while the moral-political divide has been used to illuminate the proportionality test of constitutional and other regional courts (e.g. the CJEU), normative theorists have not yet used this perspective to assess the proportionality analysis in the context of the ECtHR. What would the implications of the moral- political debate be for the ECtHR’s use of proportionality test?
Second, the workshop aspires to enrich the philosophical debate about the nature of human rights by drawing attention to the actual functioning of a leading human rights court and to complex implementation mechanisms within and by state parties. The philosophers of human rights have not yet systematically explored the European system of human rights protection, while more doctrinal- inclined scholars have not made use of the philosophical work in appraising the Court’s practice. In order to adequately tackle the question of theoretical crisis of the idea of human rights in the European context, one should combine the knowledge of the European system with a cutting-edge understanding of the philosophical accounts of human rights. The workshop thus aims to bridge the gap between the two fields of scholarly inquiry: philosophical and doctrinal. To this end, the workshop organisers have invited scholars different disciplinary orientations and levels of seniority with a view to gathering a critical mass of interdisciplinary scholarship on this topic and identifying avenues for further research cooperation.
If you are interested in joining the Workshop online – via Zoom, please contact Dr Alain Zysset (alain.zysset@glasgow.ac.uk ) to request the Zoom log-in details.
Geplaatst door Kushtrim Istrefi