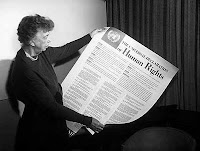 Today it is exactly 60 years ago that the Universal Declaration of Human Rights was adopted by the General Assembly of the United Nations. A reason to celebrate and to emphasize the enduring value and necessity of this document, especially in the face of the world's current and widespread violations of those rights. Today, the European Court's president gave his views in his own declaration:

In 2008 Human Rights Day coincides with the 60th anniversary of the Universal Declaration of Human Rights. Without the Universal Declaration, one of the first great achievements of the United Nations, nothing would have been possible. It called into being most of the later international human rights protection instruments, and the European Convention on Human Rights, signed as early as 1950, directly follows the line it traced.

The three regional human rights courts (African, European and Inter-American) have just held a major colloquy in the Human Rights Building, on 8 and 9 December, which provided an opportunity to compare case-law and practice.

It will soon be fifty years since the Strasbourg Court began to apply and interpret the Convention, and it is proud to have delivered more than 10,000 judgments, which have binding force and translate into concrete and enforceable terms the main principles solemnly set forth in the Declaration.

Our Court has drawn the broad lines of the right to a fair trial, the right to respect for private life, freedom of the press, the right to life and physical integrity and so on. More recently, it has intervened in new fields, such as education, the environment and bioethics. It has affirmed its case-law on protection of the rights of aliens, including in the (certainly legitimate and indispensable) context of combating terrorism. It has also tackled new social problems, such as those of a sexual nature.

The Court has successfully responded to the need to take into account the evolution of our societies and the appearance of new problems and new technologies. The diversity of the cases it has to deal with and the ever growing number of applications show that, more and more, people are turning towards the Court and placing their trust in it, with the result that its workload has been significantly increased. The celebrations – today of the 60th anniversary of the Universal Declaration, next year of the 50th anniversary of our Court – must not be focused on the past alone: we also have to think about the long-term future of the European human-rights protection system, to which we must give a new lease of life.

In the same way, Human Rights Day should celebrate what has been achieved in the past and turn towards the future. For sixty years the United Nations and the regional organisations like the Council of Europe have led humanity forward on the path of justice and freedom. But there is still a long road to travel. Let us unite our forces for the journey!