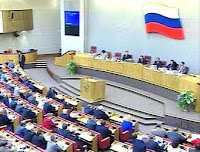 The Russian Duma has ratified Protocol 14 today (a majority of 392 votes out of 450). The other branch of the legislative, the Federation Council, now has to accept it still. Following protracted negotiations it will now be guaranteed for Russia that a Russian judge will always sit in any Court Committee or Section of judges issuing a judgment on the merits in applications against Russia. For years the ratification by Russia and thus - since it was the last state needed - the entry into force of the reform Protocol 14 to the ECHR. In 2006 the Duma refused ratification, amongst others according to several deputies because the Court was issuing politically motivated rulings.

Recently president Medvedev called for ratification and three Duma factions which together hold a large majority - the ruling United Russia, the Just Russia and LDPR -voted for ratification. According to the first deputy chairman of the Duma's committee for international affairs, Leonid Slutsky, the refusal to ratify Protocol 14 “triggered problems both for international parliamentary contacts and for the executive authority and impeded the possibility of Russian influence on the development of European institutions.”

When Protocol 14 finally enters into force a single judge will be able to decide on the admissibility of applications and a panel of three judges to rule on most cases. This raise in efficeincy will come just before the newest attempt to raise the Court's effectiveness, the upcoming Interlaken conference. Good news!
Geplaatst door Antoine Buyse