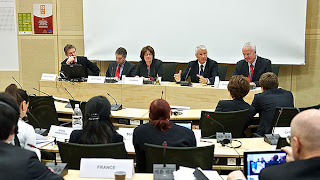 It has taken some time, not just because of the legal complexities but also because of political reasons, but now it is finally there: this past Friday the Draft Agreement on Accession of the European Union to the European Convention on Human Rights (see page 4 and further for the Agreement itself) was finalised. Negotiations had started in July 2010, but the idea had been floated as early as the 1970s. Under he more recent the Treaty of Lisbon, accession became a legal obligation for the European Union. No wonder then, that the press release of the Council of Europe speaks of a "milestone reached".

Over at the Council of Europe, Secretary General Thorbjørn Jagland, even referred to the milestone as "the missing link":

“This is a decisive step, paving the way to EU accession to the European Convention of Human Rights. It will contribute to the creation of a single European legal space, putting in place the missing link in the European system of fundamental rights protection”.

The meeting report of the final negotiations between the Steering Committee for Human Rights (CDDH) of the Council of Europe and the European Commission can be found here and the final report to the CDDH can be retrieved here.

Are we there yet, then? No, not at all. As required under internal EU law, the Court of Justice of the EU will now be asked to give its opinion, since this is an international agreement between the Union and other parties. After that the Council of the European Union will unanimously have to agree (these are the state representatives, as opposed to the Commission which undertook the negotiations). And then of course, all ECHR state parties will have to ratify as well. Please note that the Draft Accession Agreement is the key text within a wider package. There will also be a draft declaration by the EU; a draft Rule to be added to the Rules of the Committee of Ministers for the supervision of the execution of judgments and of the terms of friendly settlements in cases to which the EU is a party; a draft model of Memorandum of Understanding; and a draft explanatory report to the Accession Agreement.

As to substance, the Draft Agreement specifies that the EU will accede to the ECHR itself and to additional Protocols 1 (on property and education amongst others) and 6 (abolition of the death penalty in times of peace). Other Protocols with substantive provisions (e.g. 7, 12 and 13) will thus not apply to the EU. One of the key reasons for this is that these Protocols have not been ratified by all separate EU member states, not even Protocol 13 which abolishes the death penalty under all circumstances - it may come as a surprise, but Poland is the only EU country which has not ratified this Protocol. Thus only those Protocols about which there is full EU consensus are part of this agreement.

As to who is responsible when (and for experts in EU law this part is especially interesting), the Draft Agreement specifies as follows in its first Article:

When the EU will be co-respondent in a case, the Court of Justice of the EU will, in situations in which it has not yet assessed the "the compatibility with the Convention rights at issue of the provision of European Union law"  at stake, be given the opportunity to make such an assessment. The parties in the case in Strasbourg will then be allowed to make observations about this assessment.

The Draft Agreement (in Article 4) also broadens the possibility of inter-state applications to inter-party applications. Assuming that under EU law it is excluded that a party would start a case against the EU in Strasbourg (Article 344 of the TFEU), this option would most probably apply to two kinds of cases:

As is commonly known, inter-state party applications are extremely rare, but who knows whether and when this may be used as an instrument of foreign policy by either side. Not entirely excluded...

For a more elaborate explanation of all the provisions in the Draft Agreement, please consult the Draft Explanatory report (page 16 ff of that document).

One can only hope that the entry into force will not take as many years at that of Protocol 14. In any event, a number of key hurdles have been taken, and a considerable number still lay ahead on the long path before we will have a judge in Strasbourg in respect of the EU.
Geplaatst door Antoine Buyse