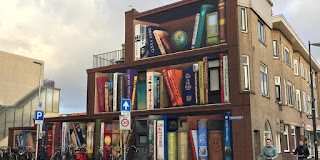 • Mikael Madsen, ‘Two Level Politics and the Backlash against International Courts: Evidence from the Politicisation of the European Court of Human Rights’, iCourts Working Paper Series 2020, no. 209:

Caption: The photo is of a graffiti bookshelf in the city of Utrecht, where SIM is based, made by visual artist JanIsdeMan.