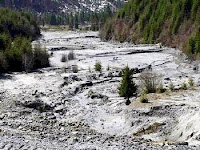 It is widely known that the extraction of precious metals from mines often happens by using dangerous chemical substances. If not properly used, such substances can cause damage to the health of people living in the vicinity of such a mine and to the environment. This is exactly what was at stake in one of yesterday's judgments of the Court: Tatar v. Romania. The Court unanimously found a violation of the right to private and family life (Article 8 ECHR). The case is another important environmental law case of the Court: it further specified the state's duties in the realms of precaution and public information.

The applicants, father and son Tatar, lived in the near vicinity of a gold mine in Baia Mare. At the end of the 1990s the gold mine's operating company Transgold obtained a permit to operate the mine with the use of sodium cyanide. In 2000 an accident occurrred: a dam breached, causing the release of 100,000 m3 of cyanide contaminated water into the environment. Father Tatar brought proceedings complaining of the environmental and health hazards (his son was asthmatic) of this disaster. Eventually, no one was prosecuted for this.

In their initial application in Strasbourg the Tatars called this "mass poisoning" and even "genocide" and complained that the situation posed a threat to their right to life under Article 2 ECHR. The Court, however, chose to deal with the case under Article 8, as it has done with other environmental issues before.

Romania, according to the Court, had not sufficiently evaluated the possibly serious risks of the gold extraction method used in the mine. Nor had it informed the general public sufficiently, since the public had not been given access to the scientific studies available, either before or after the acccident. The Court explicitly referred two times to the precautionary principle under international envrionmental law, as contained in the Declaration of Rio and the jurisprudence of its peer, the European Court of Justice. A strong and new connection to the wider legal context, it seems! The Court also noted that the Romanian authorities did not stop the activities of the mine, even after the accident. In conclusion, Romania had failed to abide by its positive obligations under Article 8 ECHR.

Since the Court did not consider a causal link to be present between the health deterioration of Tatar junior and the pollution, no damages whatsoever were awarded. On this point judges Zupancic and Gyulumyan dissented. Their partial dissent offers an intriguing critique of a rigid adherence to classical causal thinking, as opposed to more modern probabilistic theories. In these cases of exposure to toxic materials, there dissenting judges stated, absolute causality is almost impossible to prove in practice. See also paras. 105-106 of the judgment itself on this point. The use of experts (medical or statistical) could be helpful here and such expertise defies the black-and-white, yes-or-no answer that lawyers would like to hear. Nevertheless, they can be essential to come to a well-argued conclusion (see also my earlier comments on the use of experts here) And they certainly have a point. Well worth a read!

The judgment is in French (although the admissibility decision is available in English too), but a press release in English can be found here.
Geplaatst door Antoine Buyse