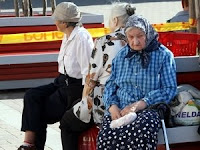 As Latvia is struggling with a governmental and economic crisis, last week bad news also came from Strasbourg for the Baltic country: in the case of Andrejeva v. Latvia, the Grand Chamber found violations of Article 14 in conjunction with Article 1 Protocol 1 (16 votes to one) and of Article 6 ECHR (unanimously). The case concerned the refusal of the Latvian state to pay the full pension of Ms Natalija Andrejeva, a so called permanently resident non-citizen belonging to the Russian minority in Latvia. She had worked in Latvia her entire life, but mostly so during the time of the Soviet Union's occupation of the country. It was for that Soviet period that the authorities refused to pay her pension, on account of the fact that she did not currently have Latvian citizenship. The Grand Chamber found that although the difference in treatment between Ms Andrejeva and Latvians in the same situation pursued the legitimate aim of protecting the country's economic system, it was not proportional. The Chamber amongst others considered that the applicant satisfied all other requirements except nationality and that Latvia was the only state with which she had stable legal ties and as such Latvia was the only state which could, on an objective basis, take the responsiblity for her in the context of social security.

This can be considered as an important victory for the very large group of 'non-nationals' mostly ethnic Russians, in Latvia, whose position has often been assessed by Council of Europe monitoring bodies as needing improvement.

The large sensitivity of the question for Latvians is eloquently reflected in the very lenghty partly dissenting opinion of the Latvian judge in Strasbourg, Ineta Ziemele. In no less than 19(!) pages she sets out why she does not agree with her other colleagues that there was a violation of the right to non-discrimination. Among others, she goes into matters such as state succession and the interpretation of the ECHR in the broader context of international law.

The press release of the case can be found here. A public hearing in the case took place in June last year and can be watched here.
Geplaatst door Antoine Buyse