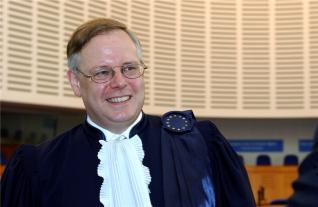 The judge elected on behalf of Luxembourg, Dean Spielmann, has today been elected by his peers as the successor to the Court's current President, Nicolas Bratza. The latter's term of office as judge at the European Court of Human Rights is due to expire on 31 October. Spielmann will succeed him on 1 November. The change comes after a momentous year in the Court's history, with more external criticism than before (although the storm seems to have subsided a little) and with the Brighton reforms on the agenda for the years to come. Judge Spielmann will thus face not only the daunting task of more streamlining of the Court's own procedures in order to tackle the now finally slightly decreasing caseload - in addition, his role will also be one of public diplomacy in continuing to explain - like his predecessors - the Court's important role in the European system of human rights protection.

Dean Spielmann has been a judge at the Court since 2004, Section President since 2011 and Vice-President since this summer. The latter election was to attentive observers a sign that judge Spielmann was in the running for the Court's presidency, just as another recent event might have provided a clue: on a visit to the Inter-American Court of Human Rights two weeks ago, the Court's current President, Bratza, was accompanied by a Spanish-speaking colleague (Casadevall), section registrar Quesada and ... Judge Spielmann. A short CV can be found on the Court's website.

The election also led to more reshuffling within the Court. Guido Raimondi, judge in respect of Italy, will be Vice-President as of 1 November and Mark Villiger (Liechtenstein) and  Isabelle Berro-Lefèvre (Monaco) will become Section Presidents. They have all been elected for a three-year term and will take up their respective duties on 1st November 2012.

In an interview given to a Luxemburg newspaper, Le Quotidien, on the occasion of his election as Vice-President a few months ago one can read some of Judge Spielmann's views on the Convention, the Court and its role. Although he emphasizes that the Court cannot invent new rights, he does strongly advocate the Court's standing case-law that the ECHR is a living instrument to be interpreted according to present-day conditions, or in Spielmann's words to give the Convention "un relief contemporain".

My congratulations - and wishes of good luck and much wisdom - to judge Spielmann and the other judges appointed in their new functions!
Geplaatst door Antoine Buyse