Speech of Bratza and Candidates for New Judges 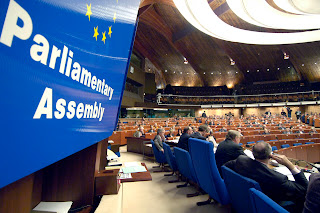 Bosnia and Herzegovina, Croatia, Moldova, and the Russian Federation have all submitted lists of three candidates (some of them new ones after earlier lists had been sent back or candidates withdrew) to the Parliamentary Assembly of the Council of Europe. One may note that the three Russian candiates are either academic experts in business law or judges in Russia's Supreme Commercial Court.

And on a different note, the Court's President, Nicolas Bratza, delivered a speech yesterday at the European conference of presidents of parliament. I reproduce it here in full:

Ladies and Gentlemen, may I join with the President of the Parliamentary Assembly Jean-Claude Mignon and the Secretary-General Thorbjørn Jagland in welcoming you all to Strasbourg.


I would like to open this debate with words of thanks to the Parliamentary Assembly for putting the future of the European Court of Human Rights as the first theme on the agenda of this high-level gathering. This is a time of a general movement in favour of Europe’s unique human rights protection system, and your parliaments are of course vital actors in this.

In the same breath I would mention the role of the Parliamentary Assembly, which has kept faith with the Convention and the Court since the very beginning. The first members of this body pressed the Governments of the day very strongly to create the first human rights treaty of the modern era. Every development in the Convention system since then has had the blessing of this institution, which has not wavered in its regard or its support for the European Court.

An interesting study published in Britain on the eve of the Brighton Conference made the point that there is a democratic deficit in the field of human rights. This is not, in the view of the authors, because the courts have exceeded their proper role, but because the Westminster parliament has yet to fully play its role in ensuring that human rights are effectively respected. That study looked only at the situation in the United Kingdom and the practice of Westminster, but its message may be relevant to other countries and other parliaments represented here today.

In the process of reform of the Convention system that is now underway, there is one key word that speaks directly to legislators, and that is “subsidiarity”. In the context of the Convention, this term has a specific meaning – it defines the role of the Convention organs (the Court and the Committee of Ministers) relative to that of the national authorities – legislature, executive and judiciary. It was decided at Brighton to write this word into the text of the Convention – this will be one element of Protocol No. 15 that will in due course come before your respective parliaments for ratification. But subsidiarity has long been recognised as a cardinal principle of the Europe’s human rights system. It is implicit in the very design of that system, and the Court has been mindful of it from the beginning.

The Strasbourg role is subsidiary to the national role. The primary responsibility for respecting human rights rests with States. It is for them to act in the first place. Failing that, it is then the responsibility of the Court and the Committee of Ministers to ensure that the rights which States have enshrined in the Convention are given effect to in practice.

In this way, as the three high-level conferences on reform have put it, responsibility is shared between the national and the European level. And so the reform process rightly focuses on both. There is today a strong consensus over the importance of improving national implementation of the Convention. Nowhere is this clearer than in the Brighton Declaration, which opens with a detailed list of concrete measures that States should be considering. It can be seen as a broad blueprint - not one that is imposed by Europe, but one put together by States and made up of ideas and proposals that have proven their worth in actual practice, and can be adapted as required to other States. I believe that legislators will find much material to work with there, and I hope that the parliaments of Europe will take up the challenge of putting human rights onto a stronger footing.

One aspect that I would highlight in particular is the provision of effective remedies at national level. This is no mere formality or technicality – it is the mainstay of the Convention system, and goes to the heart of subsidiarity. Domestic courts need to be equipped to play to the full their role in protecting Convention rights. This truism provides the key to understanding why some of the largest, most populous European States, such as Germany or Spain, account for relatively few cases before the Court. Turkey has drawn inspiration from these examples – a new individual remedy before the Constitutional Court takes effect this month, with the potential to strike a new balance between the domestic and the European systems.

Where domestic remedies are lacking or deficient, applicants will continue to have recourse to Strasbourg for what they cannot find at home. What we should strive for is that an application to the European Court becomes the exception and not the rule, as it can sometimes appear.

May I sketch very briefly the current situation of the European Court of Human Rights.

I begin with the good news that one of the structural reforms of Protocol No. 14 has worked extremely well in practice. I refer here to the new power of the single judge to filter out clearly inadmissible cases. Because of this, the tide has actually turned – for the past year, and for the very first time, the number of cases pending before the Court has started to go down month by month.

The problem of repetitive cases remains intact, however, with nearly 40,000 of these pending. It is not a generalised phenomenon – it affects only some States. But it creates serious difficulty for the Convention system, placing great strain on the Court and hindering the efficient administration of justice. Faced with such huge numbers of cases, the Court operates a policy of prioritisation, with the highest priority going to the most urgent, serious and significant applications. The consequence of this is that many thousands of applicants have little prospect of seeing their case decided within any reasonable – or foreseeable – timeframe.

I want to emphasise that the Court is willing to be part of the solution. To this end it adopts pilot judgments, and leading judgments, that provide guidance to national authorities about how to overcome deep-seated problems in the domestic system. Your role as legislators is obviously vital. The systemic problems that are brought before the Court generally call for legislative reform. Additional measures are often called for too, including the allocation of extra resources. At a time of financial crisis, these are not the most welcome of words. But the problems that cause thousands of individuals to bring repetitive cases to Strasbourg each year cannot be disregarded.

The future of the European Court of Human Rights really does depend on States treating effectively the causes of repetitive cases, and the consequences.

I turn now to a more general point that I consider very relevant to this distinguished gathering – the margin of appreciation that is accorded to national authorities by the Court. It is a concept often referred to in the same breath as subsidiarity – indeed, at Brighton the States decided to add both points to the Preamble of the Convention. In many types of case, the Court’s approach is first to determine the appropriate margin of appreciation. There is no general formula for this – whether the margin is broad or narrow depends on a number of variables. The second stage is to establish whether or not the national authorities remained within that margin. An important consideration here is the structure of national legislation, and the legislative process behind it. In the best-case scenario, the legislative process is clearly marked by a sensitivity on the part of legislators to the human rights implications of the laws adopted, reflected in the preparatory work and parliamentary debates. The legislature’s considered judgment carries much weight with the European Court of Human Rights, which recognises “that the national authorities have direct democratic legitimation in so far as the protection of human rights is concerned”, and that “by reason of their direct and continuous contact with the vital forces of their countries, they are in principle better placed than an international court to evaluate local needs and conditions”.

As for the structure of national legislation, what I have in mind is the importance of proportionality, an often decisive consideration in human rights cases. A legislative regime that is closed to considerations of proportionality and the balancing of interests runs the very real risk of taking the State outside its margin of appreciation. That balancing exercise is a typical function of the domestic courts, but it may be done directly, and successfully, by the legislature itself. The Court has decided numerous cases in this sense.

Given the growing scope and sophistication of human rights law in our modern societies, much is expected of our lawmakers. Access to expert advice on human rights law is therefore a prerequisite, as the Parliamentary Assembly has argued in its Resolution 1823 last year, and States have recognised, albeit in different terms, in the Brighton Declaration (at 9.c.ii). Here too the Court has shown itself willing to assist by continuously improving its practice when it comes to providing information on human rights case law.

May I make one final point before concluding, and that relates to the subject of dialogue. In the European Court of Human Rights we believe very strongly in the value of dialogue with national authorities. Our main interlocutors are, of course, the senior courts of European States. But we have also been attentive to developing our contacts with parliaments. We regularly receive parliamentary delegations at Strasbourg, who can see directly how the Court functions and engage in discussions about the work of the Court with judges and legal staff. And official visits to Member States invariably include discussions with parliamentary authorities. These are valuable and useful contacts, and I can assure you that the Court intends to develop them further in future. They are, to use the words of the Brighton Declaration, an invaluable “means of developing enhanced understanding of their respective roles in carrying out their shared responsibility for applying the Convention”.

The future of the European Court of Human Rights is among the highest priorities of the Council of Europe, and of very real importance to all the peoples of Europe. The Convention remains the crowning achievement of this organisation, and commands our wholehearted and enduring support. I know that, with your support and that of the parliaments you represent, the future of this remarkable Court and the protection of fundamental rights throughout Europe will be secure.