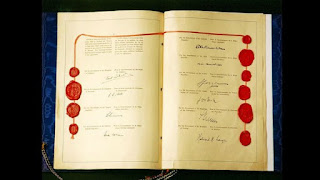 Exactly one month ago, on 4 November 2015, the European Convention on Human Rights had been in existence for exactly 65 years. In 1950, thirteen Council of Europe Ministers signed the treaty in the Palazzo Barberini in Rome. To commemorate that special moment and all the developments since, my alma mater, the Leiden Law School organised a special event in which all invited speakers were asked to deliver short, column-like, thought-provoking or even comical statements on the Convention and the Court, which were not allowed to exceed five minutes. Among the speakers were the President of the Dutch Supreme Court, the Dutch government agent at the Court, and a number of academic ECHR experts, including yours truly. Several of these contributions have now been published on the website of Leiden Law School and will also be published in the Dutch human rights review (Nederlands Tijdschrift voor de Mensenrechten). This was my own tongue-in-cheek addition to the line-up of speakers:

Jeckyll and Hyde in Strasbourg

Having a split personality is usually not seen as a positive thing. Not for the outside world, and not for the person itself. Robert Stevenson’s novel about Dr Jekyll and Mr Hyde famously showed how the constant shifting between personalities could almost destroy someone. A clear and unified self-perception and image is the preferred style of identity in almost all fields of life and practice, from organizational science to marketing and psychology. Choices have to be made for the sake of clarity and efficiency, but also for the mere functioning of a person or organization it seems.

From this perspective, it is no surprise that the history of the main guardian institution of the ECHR, the European Court of Human Rights, which celebrated its 50th anniversary this month on 4 November, has been marked by an almost constant discussion about the Court’s role and focus. The text of the Convention itself seemed straightforward enough about the function of the Strasbourg Court. It states in Article 19 that the Court was created “to ensure the observance of the engagements undertaken by the High Contracting Parties.” But the ways in which this can be done has led to deep soul-searching within the Court and a lot of debate outside it. Should the Court focus on the role of provider of individual justice in the applications that represent the large bulk of its docket, or should it, for principled or pragmatic reasons take an altogether different, more constitutional role, ruling on principles and structures rather than the nitty-gritty of each individual case?

Looking back at the history of the Court’s work in acting as guardian of the Convention, we can easily discern traces of both. Most judgments have focused on very individualised instances of injustice. But the Court started pointing at structural deficiencies in states early on, for example in Marckx v Belgium. In addition, there have been a few inter-state cases of course. And more recently, in the last decade, state parties have nudged the Court into experimentation leading away, at a slightly larger scale, from dealing with all individual cases. The Convention since Protocol 14 includes a provision in Article 35 on the possibility to dismiss cases in which the applicant did not suffer “a significant disadvantage”. Not every single case merits discussion by the Court anymore. However sparingly used, it departs from the principle of purely providing individual justice to everyone coming to Strasbourg. In a more significant move, the Court has developed the practice of the so-called pilot judgment procedure, starting with the Broniowski v Poland case in 2004.

Pilot judgments are a tool to be used when the Court receives a large number of applications with the same root cause. The Court then selects one, pars pro toto, to deal with all comparable applications. In a pilot judgment, the Court both identifies the structural human rights problem at stake and gives indications to the state concerned that go beyond the individual case. These problems have so far included overly long judicial procedures, property restitution programmes, and prison conditions for example. This in effect gives the Court a quasi-constitutional role through the lens of one case.

Often but not always, comparable cases pending before the Court are “frozen”, leaving these other applicants in the metaphorical cold, or eventually even sending their case back to the national level. For them, the benefits of the Court taking a constitutional role may be quite difficult to see. And sometimes, the pilot judgment procedure yields no direct results at all, as the country at stake resists the Court’s more intrusive, constitutional actions. This was the case in the British prisoners’ voting rights saga. But when the pilot procedure works well, it not only saves the Court work, it also goes beyond the combatting of symptoms and addresses the causes of human rights problems more directly. In those instances the Court weds its individual-justice personality with its constitutional one.

To conclude, the Court has to deal on a daily basis with countries who constantly shift from nice dr Jekylls to evil Mr Hydes and vice versa. The agility with which states oscillate between good and bad human rights practice is obviously not something to be copied by the Court. But I certainly wish for the Court in the coming years to become more at ease with its double identity as both a guardian of individual justice and as a constitutional actor. The two can and should co-exist. The Court itself has called the Convention a living instrument. It is time the Court accepts something else: that it has, itself, a living identity.
Geplaatst door Antoine Buyse