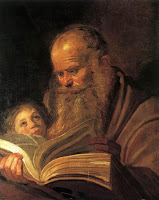 * The European Court's proceedings of its annual seminar 'Dialogues Between Judges', at the opening of the court's judicial year. are available on a dedicated web page.
Geplaatst door Antoine Buyse