New Book on Fatherhood and the ECHR 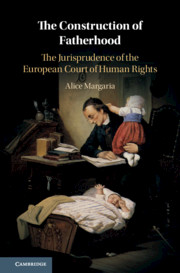 Alice Margaria of the Max-Planck-Institut für ethnologische Forschung has just published The Construction of Fatherhood. The Jurisprudence of the European Court of Human Rights with Cambridge University Press. A great example of combining social sciences and the law. The book has already received praise from scholars who referred to it as "exemplary piece of scholarship" (Eva Brems), "a crystal-clear overview of the construction of fatherhood" (Frederik Swennen)  and "nothing short of a jewel - the author knows how to allow a highly complex, dynamic and technical theme to unfold gradually and naturally. In doing so, she has produced a 'tour de force' that is both highly enlightening and genuinely exciting to read" (Marie-Claire Foblets). This is the abstract:

'The book tackles one of the most topical socio-legal issues of today: how the European Court of Human Rights is responding to shifting practices and ideas of fatherhood. The jurisprudential analysis is situated in a context of social change that offers radical possibilities for the fragmentation of the conventional father figure and therefore urges decisions upon what kind of characteristics makes someone a legal father. In a range of paradigmatic domains, this book explores the Court's understanding of what it means to be a father today, and whether care is valued at all. It also reflects on the genesis of the Court’s (re-)construction of fatherhood, thus shedding light on the roles played by doctrines of interpretation.'
Geplaatst door Antoine Buyse

Special Issue on ECHR and Derogations

The Austrian Review of International and European Law Online has published a special issue on derogations from the European Convention on Human Rights. My SIM colleague Kustrim Istrefi  (Utrecht University) and Stefan Salomon (University of Graz) were the editors of this volume that goes into a number of country case studies of recent real or announced derogations from the ECHR in the last few years. These are the articles included in it:

* Kushtrim Istrefi and Stefan Salomon, 'Entrenched Derogations from the European Convention on Human Rights and the Emergence of Non-Judicial Supervision of Derogations'

* Luca Pasquet, 'The French State of Emergency: From Crime-Repression to the Protection of Public Order'

* Kerem Altiparmak and Senem Gürol, 'Turkey’s Derogation of Human Rights under the State of Emergency: Examining its Legitimacy and Proportionality'

New Book on Admissibility at the European Court

Robin Schädler has published the new book Re-designing the Admissibility Model of the European Court of Human Rights with Schulthess Verlag. The book re-interprets the existing admissibility criteria with a view to making their interpretation more principled and predictable. Based on a theory of justice termed "communitarian egalitarianism", the thesis compares the stance of the European Court of Human Rights with six European constitutional courts to see whether any lessons can be learned from them. It is partly based on around 60 interviews with judges, judicial assistants and other stakeholders. This is the abstract (in German):

'In this article we investigate the relationship between the Court of Justice of the European Union and the European Court of Human Rights as it manifests in explicit cross-references between the two Courts’ jurisprudence. The analysis detects cross-references, how they are used and indications of converge or divergence in the jurisprudence through their explicit citations and references. Our dataset consists of the entire corpus of judgments from both Courts from 2009 (when the EU Charter on Fundamental Rights came into force and until the end of 2016. On the basis of a content search for references to the other Court in both corpora we detect all their cross-references. We find that 1) the Courts’ use each other’s case law surprisingly little, but when they do, it is 2) primarily within the legal domains of criminal justice and immigration policies, and 3) displaying convergence towards the jurisprudence of the other Court.'

The purpose of this paper is to encourage a reflection on the use of anonymous witness evidence by the European Court of Human Rights. An analysis of the leading cases solved by the Strasbourg judges will provide an overview of the European case law developments on such a delicate topic, considering how the accused’s right of defence is seriously impaired when anonymous depositions are admitted in proceedings. The Court’s most recent decisions on this topic do create some concern. They represent a considerable step backward in the guaranteed right to confrontation, which, especially when dealing with anonymity, does not seem acceptable. While there is no question on the need to protect persons other than the accused in criminal proceedings and on the urgency to safeguard the safety of witnesses, when in danger, and preserve the source of evidence, on the other hand, it is hard to imagine what “counterbalancing procedures” could compensate for all that the accused is denied when the identity of the person making incriminating statements against him/her is concealed. It is, therefore, a matter of making a civilised choice, and of asking ourselves whether in a trial that still aspires to be defined as “fair”, anonymous incriminations may be tolerated.'

* Katarina Frostell, ‘Welfare rights of families with children in the case law of the ECtHR’, The International Journal of Human Rights (published online 29 July 2019):

'This article sets out to apply a human rights perspective on welfare rights of families with children. It explores how such rights emerge in the case law of the ECtHR by focusing on traces of substantive welfare rights in the Court’s reasoning when determining the personal and material scope of ECHR rights at different stages of the proceedings. The rights under investigation are the right to non-discrimination, the right to respect for family life and the right to property. The findings show that the right to non-discrimination has in many instances managed to question gender stereotypes by taking important steps away from the biologically defined conception of motherhood towards viewing caring roles and tasks more as social functions that both social and biological parents are fulfilling. Vulnerable groups of mothers and children have had more difficulties in getting their rights protected under the present non-discrimination framework. Developments under Article 8, indicating that the right to family life includes a core element of social rights at least in the context of destitute families are therefore promising.'

'What does the protection or prohibition of a speech tell us about the tripartite relationship between political power, democracy and rights? This question has somehow underscored the jurisprudence of the European Court of Human Rights in hate speech cases for more than a half century. We argue that this question has invariably placed the Court in an uneasy position, which is, choosing between a democracy empowered by unlimited freedom of speech, but with recurrent social tensions, and a democracy with rather strict hate speech laws, but at ease with different segments of population. That said, the jurisprudence of the European Court outlines a pattern by which to identify a specific direction for the evolution of rights and democracy. This article considers this pattern. Not only does this article examine the pattern in the Court’s and the Commission’s jurisprudence, but it also argues that this pattern unfolds a subtle presence of Hobbesian and Lockean theories of political power and the limits in its midst. By invoking this presence, we indicate how the debate in the jurisprudence of the European Court has shifted from the language of protecting democracy to that of rights.'

'The European Court of Human Rights increasingly deals with migrants’ complaints about destitution in their host state under Article 3 of the European Convention on Human Rights (the prohibition of inhuman and degrading treatment). This case law has been criticized for not being consistent and/or for not providing migrants with enough protection. Based on a systematic case law search, in this article, I analyse Article 3 case law on migrants’ destitution from a new perspective: the concept of freedom as non-domination, as developed in (neo) republican theory. It will argue that, seen through this lens, many tendencies in the Court’s case law can be explained and constructed as consistent, and it is submitted that in this way the Court does provide migrants with important protection against unfreedom. Nevertheless, I also argue in the article that the case law could be improved in a number of ways in order to provide more effective and robust protection against domination.'
Geplaatst door Antoine Buyse