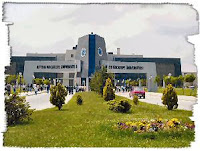 Today the Court found a violation of the right to education of university students in Turkey in the case of Temel and others v. Turkey. In 2001 and 2002 a group of 18 studnets had petioned their university, Afyon Kocatepe University (see photo), requesting the introduction of optional Kurdish language classes. The university reacted by suspending the students for two terms. The justification given was Regulation 9 (d) of the Disciplinary Regulations of Higher Education Institutions which provides that a person who engages in activities which give rise to polarization on the basis of language, race, religion or denomination is to be suspended from the institution in question for either half or a whole term. Initially, when the students applied to national courts to have their suspension lifted, those courts rejected the applications with the same argumentation. Later, the Supreme Administrative Court quashed those lower judgments. When a lower court re-examined the case, it found that the students had not violated any regulation. By then, the students had missed one or two terms of study.

The European Court found that the disciplinary sanction had not been reasonable or proportionate. Specifically, it considered that the students had not resorted to violence or breaches of the peace and that their request for Kurdish language classes could not be seen as leading to polarization within the university. Thus, it unanimously concluded that Article 2 of Protocol 1 ECHR (right to education) had been violated.

In a separate opinion judge Cabral Barreto indicated that he would have preferred that the case would have been dealt with under article 10 ECHR (freedom of expression) and by the Grand Chamber.