HRW Report on Russia and ECHR 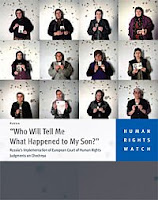 The NGO Human Rights Watch has published a report on Russia’s implementation of Strasbourg judgments relating to Chechnya: "Who Will Tell Me What Happened to My Son?". The report investigates a number of cases in which the European Court found violations of the Convention and specifically delves into the aftermath. What happened after the judgments were issued. The short answer is saddening: almost nothing. The report shows that not a single person was brought to justice afterwards. It seems that thusfar Russia limits itself to paying the required compensation to the victims, but stops there. The report mentions that "in a troubling new trend, in several cases Russian investigative authorities have flatly contested the court's findings of state responsibility for human rights violations in Chechnya, even in cases in which those officials participating in the operations that led to violations or their superiors are known and named in court judgments." Hopefully the Committee of Ministers and other organs of the Council of Europe will use the evidence presented in this and other reports to make sure that Russia will start to implement the Court's judgments much more effectively. This is the abstract of the report:

This 38-page report examines Russia's response to European Court judgments on cases from Chechnya. In almost all of the 115 rulings, the court concluded that Russia was responsible for extrajudicial executions, torture, and enforced disappearances, and that it had failed to investigate these crimes. In the 33 cases researched by Human Rights Watch, Russia has still not brought a single perpetrator to justice, even in cases in which those who participated in or commanded the operations that led to violations are named in the European Court judgments.