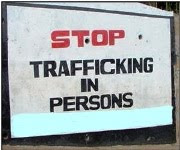 Yesterday, the European Court passed a landmark judgment on human trafficking in the case of Rantsev v. Cyprus and Russia. The case concerned the death of Oxana Rantseva and was brought by her father. Oxana moved from Russia to Cyprus and started to work as a 'cabaret artiste', as one of thousands of women coming to Cyprus. It was widely known that these 'artistes' were in practice mostly working as prostitutes. Within a few weeks she left the place where she worked, but was traced by her employer who brought her to the police with the aim of haiving her detained and extradited, so that he could employ someone else. The police noted that she was not illegally staying in Cyprus, but had a work permit and made her go back with her employer. Later that night, she tried to escape from the apartment where her employer was keeping her and in doing so fell of a balcony and died. In spite of the mysterious circumstances of her death, the context of possible human trafficking was never looked into by the authorities.

The Court found, unanimously, that trafficking in human beings, although not epxlicitly mentioned in the ECHR, fell within the scope of Article 4 (prohibition of slavery, servitude and forced labour). This is a rarely used Convention provision, on which there is only one earlier Court judgment in the context of human trafficking: the case of Siliadin v. France (Appl.no. 73316/01) of 2005, in which the Court looked into a situation of girl from Africa held in servitude as a housemaid in France. That judgment focused only the failing criminal law framework in place at the time. In the current case of Rantsev the Court took a much more thorough look at the whole issue of trafficking and clarified the obligations of states in this respect. An additional striking feature in this case is that the complaint was lodged against two state parties. Applying its case law under Articles 2 and 3 ECHR by analogy, the Court held the following (para. 284):

The Court considers that the spectrum of safeguards set out in national legislation must be adequate to ensure the practical and effective protection of the rights of victims or potential victims of trafficking. Accordingly, in addition to criminal law measures to punish traffickers, Article 4 requires member States to put in place adequate measures regulating businesses often used as a cover for human trafficking. Furthermore, a State’s immigration rules must address relevant concerns relating to encouragement, facilitation or tolerance of trafficking.

Whereas in Siliadin, the Court had focused on the positive obligation to penalise and prosecute acts of slavery, servitude or forced labour, it broadened its approach here - in line with explicitly mentioned other internatinoal instruments on human trafficking such as the Protocol to Prevent, Suppress and Punish Trafficking in Persons, especially Women and Children (“the Palermo Protocol”), supplementing the United Nations Convention against Transnational Organised Crime - to two other aspects: positive obligations to prevent trafficking and to protect victims. If the authorities are aware of a situation of human trafficking or of the real risk that an individual will get into such a situation, it is obliged to take appropriate measures. This includes a procedural obligation to investigate situations of potential human trafficking and to cooperate with the investigations of other state parties. This goes for both states of origin, transit and destination.

Cyprus had violated Article 4 in mutiple respects, including the obligation to operate an effective administrative framework to prevent trafficking in general and the obligation to take protective measures in the case of Ms Rantseva in particular. Russia had violated Article 4 ECHR by failing to investigate the alleged trafficking and its potential start in Russia itself, once the Russian authorities had become aware of Ms. Rantseva's case.

In addition, under Article 2 ECHR (right to life) the Court found no violation of article 2 in its substantive aspect, since the chain of events leading to Oxona's death could not have been foreseen by Cyprus. The investigation, however, contained so many flaws that many of the aspects of the case remained opaque. Nor had Oxona's father sufficiently been involved in the investigation. The Court thus found a procedural violation of Article 2. As to Russia's responsiblity, the Court emphasized that the corollary of the duty to secure evidence from other relevant countries during the investigation, had as a corollary that such countries should, within their means and competence render such assistance if requested. This is also a novel clarification of the Convention. In this case, Russia had done more than it was expected to, whereas Cyprus had not even asked Russia for assistance. Thus no violation under Article 2 was found against Russia.

Finally, the Court found that Cyprus had violated Ms. Rantseva's right to liberty. This was obvious concerning her detention at the police station, even if short, for which there was no legal basis. But the Court also found, that the forced stay of Oxona Rantseva at the apartment violated Article 5, since the authorities had failed to observe their positive obligation to protect her from arbitrary detention by a third party. In this case, within a known context of the cabaret artistes situation on Cyprus and her particular case, and by handing her over to her employer instead of letting her go by herself from the police station, they had acquiesced in her loss of liberty. The fact that she did not openly protest was irrelevant for the Court.

The judgment not only represents a milestone in the combat against human trafficking, but more generally elucidates state obligations in the battle against transational crime. It is commendable that the Court through its verdict offers new yardsticks to assess state performance in this respect.

To read the report by Interights on the case click here. This NGO also submitted a third pary submission to the Court, which can be read here. Even the Wall Street Journal reports on the case; click here.
Geplaatst door Antoine Buyse