No Religion on Identity Cards 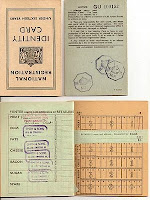 Yesterday, the Court ruled in the case of Sinan Isik v. Turkey on the mentioning of religious affiliation on identity cards. Mr Isik was a member of the Alevi community, which is seen by some as a part of Islam and by others as a separate religion. His request to change the religion on his identity card from 'Islam' to Alevi was refused by the authorities. Only since 2006 a new legal provision allowed citizens to ask for a change of religion on their identity cards or even to have the entry left blank.

The Court reiterated that the freedom of religion (article 9 ECHR) also included a negative aspect, including the rigth not having to manifest one's religion or beliefs. The core of the issue for the Court was not so much the refusal to register the applicant as Alevi, but more broadly the very fact that he either had to indicate his religion or formally ask for the religion box to be left empty. That in itself, in the Court's view, violated the Convention. It seems from the judgment that this goes not only for identity cards, but also for civil registers.

The case is especially interesting since Turkey is a state with the notion of "laïcité" as one of its defining aspects, but the state here determined - through the legal advice of the Religious Affairs Directorate, that the Alevi faith was part of Islam.

Continuing a recent trend in its own jurisprudence, the Court indicated under Article 46 ECHR (the duty for states to abide by the Court's judgments) that the complete deletion of the 'religion box' on identity cards would be an appropriate remedy for the violation concerned.

One of the seven judges, Cabral Barreto dissented, arguing that the Court went too far and deviated from its own case-law by holding that even in a case like this, in which people were allowed to ask for a deletion of the mentioning of a particular religion without divulging what other beliefs they held, the Convention was violated. He does add that he sees no value or interest whatsoever in including religion on an identity document.

The judgment itself is in French, but a press release in English can be found here.
Geplaatst door Antoine Buyse