Article on Court After Interlaken 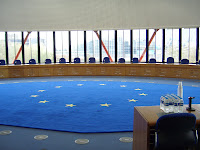 In the wake of last year's Interlaken reform summit, discussions have started again about the core functions of the European Court of Human Rights. A recent working paper by Fiona de Londras of University College Dublin, later to be published in the Irish Human Rights Law Review, analyses the issue. The article is entitled 'The European Court of Human Rights, Dual Functionality, and the Future of the Court after Interlaken'. This is the abstract:

The existence of the European Court of Human Rights is generally considered to be central to the success of the European Convention on Human Rights. For that reason, there is ongoing and significant concern about the future of the Court; a future that is characterised by fragility emanating from a number of sources not least of which are increased political antipathy towards the Court from a variety of member states and enormous volumes of applications resulting in serious logistical difficulties. Taking the fragility of the Court’s future into account, this paper asks whether the dual functions that we expect the Court to perform — a constitutionalist function and an adjudicatory function — can be sustained or whether, in fact, that dual functionality contributes to the Court’s fragility.

This fragility clearly presents a crisis for the Court, and it is not one of which either it or the member states to the Council of Europe are unaware. Indeed, in early 2010 a conference was held in Interlaken, Switzerland in order to agree upon a declaration that would secure the future of the Court. At that conference and, indeed, in the Declaration that followed it, the basic principle of dual functionality was preserved. In this paper I argue that any solution that attempts to maintain a full commitment to the European Court of Human Rights acting as both a constitutionalist and an adjudicatory tribunal has only a limited prospect of success in securing the Court’s future. Not only is that approach one that fails to come fully to grips with the logistical nightmares from which the Court finds it so difficult to awaken, but it also allows for the Council of Europe system to abdicate its political role in ensuring compliance with the Convention and for domestic politics and courts to rely too heavily on the subsidiary regional Court instead of developing an autonomous jurisprudence on the Convention.