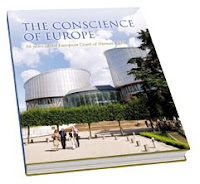 This week the book 'The Conscience of Europe. 50 Years of the European Court of Human Rights' is launched in Strasbourg. This is not so much a book directed at academics or lawyers - though certainly also of interest to them - but to a much broader audience. In a very accessible way, this big volume is a beautifully illustrated overview of the work, history, and significance of the European Court of Human Rights as well as the former Commission. It also offers a true insiders' view, with lots of short articles, memories and impressions of former and current judges and staff, as well as a host of illustrations and cartoons about the Court. It also includes biographical sketches of all the presidents of the Court and the Commission as well as a history of the Court's current and previous buildings. I was most struck by a short and funny note of an anonymous judge to the Court's president in the 1980s complaining about the casual attire of Dutch counsels apprearing before the Court. Here is a short quote:

One does feel a little silly wearing a fur-trimmed blue stole opposite a member of one's own profession wearing blue jeans and a fancy top. One of us has to give in and I am sure it is not us who should take to wearing fancy tops (maybe with a sheriff's star) and blue jeans. It should, if anything, be the other way around.