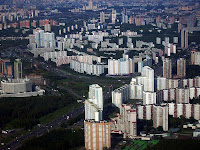 What to do when one buys a house or an apartment in good faith, but it later on expires that the original owner had acquired it by fraud? To what extent should the interests of the new bona fide owner then be protected? These questions arose in the case of Gladysheva v Russia in which the Court rendered judgment this week. Svetlana Gladysheva bought an apartment in moscow from an earlier owner. That person had, in turn bought it from a certain Ms Ye, who had bought the (formerly social housing) apartment from the state under a privatisation scheme. Several years later, the authorities found that Ms Ye had bought the flat through fraud and as a consequence they declared that the flat had therefore illegally been removed from the city of Moscow's possession. Although they acknowledged that Gladysheva had bought the apartment in good faith, they revoked her title to the flat and even issued an eviction order.

In Strasbourg ,the applicant complained that the revocation of the title to the apartment was contrary to Article 1 Protocol 1 (P1-1, protection of possessions) and that the eviction order violated article 8 (respect for the home. In its judgment, the European Court of Human Rights indeed found two violations of the ECHR.

As to P1-1, the Court noted that the revoking of the applicant's title was disproportionate. Specifically, the fact that the fraud was only discovered years later was completely due to the authorities themselves. It was not for the applicant, the Court assessed, to (para. 79) "assume the risk of ownership being revoked on account of defects which should have been eliminated in procedures specially designed to do so. The authorities’ oversight could not justify subsequent retribution against a bona fide buyer of the property in question." Moreover, no compensation whatsoever nor any prospect of alternative housing had been offered. The Court concluded that the state should have born the consequnces of its own mistakes and should not have put them on the shoulders of an individual citizen - this constituted an excessive burden.

As to Article 8 ECHR, the Court focused on the eviction order, which in itself amounted to an interference with Article 8 even though it had not been carried out yet (this follows from earlier case-law). The legitimate aim - protecting the rights of people on waiting lists for social housing - was accepted by the Court as a legitimate one. However, automatically ordering an eviction after the ownership rights had been taken away, without taking Ms Gladysheva's interests into account at all, violated Article 8. No proportionality assessment was made, no other individualised interest which would outweigh the applicant's attachment to the flat were shown, and no alternative housing or shelter had been offered.

The Court also ordered a specific form of reparation in this case> Under Article 41 ECHR (just satisfaction) it held that the most appropriate way of redressing the violations - specifically because no countervailing third-party individual interest was at stake - was to simply restore the title of ownership to Ms Gladysheva and to reverse the eviction order. This comes on top of the 9,000 euros which Russia has to pay the applicant for non-pecuniary damages. In the part of the judgement on just satisfaction, the Court re-emphasizes specifically the "central importance of the right to home [sic!] in the Convention hierarchy of rights" (para. 105). Housing issues in relation to Article 8 are of central importance for someone's "settled and secure place in the community" (para. 93).

This judgment sends a clear signal that national authorities should take housing rights, specifically the protection of the home, seriously. Under the ECHR, this is more than a simple property issue - respect for the home also has important social and other connotations which strengthen the protective umbrella of the ECHR (the issue of attachment to a home counts) in such cases. Individual interests based on this should always be taken into account by states when interfering with housing rights. To put it differently, human rights start at home!
Geplaatst door Antoine Buyse