Lord Irvine's Take on the ECHR 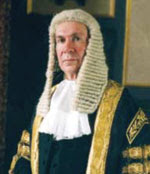 Last Wednesday, Lord Irvine of Lairg, the 'architect' of the Human Rights Act, delivered a lecture at the Bingham Centre for the Rule of Law adding to the discussion on the ECHR in the United Kingdom. The lecture is entitled 'A British Interpretation of Convention Rights'. As Lord Irvine stated at the start of his lecture, he aimed:

(a) to ensure that the Supreme Court develops the jurisdiction under the HRA that
Parliament intended;
(b) that, in so doing, it should have considered and respectful regard for decisions of the ECHR, but neither be bound nor hamstrung by that case-law in determining Convention rights domestically;
(c) that, ultimately, it should decide the cases before it for itself;
(d) that if, in so doing, it departs from a decision or body of jurisprudence of the ECHR it should do so on the basis that the resolution of the resultant conflict must take effect at State, not judicial, level; and
(e) by so proceeding, enhance public respect for our British HRA and the development and protection of human rights by our own Courts in Britain.