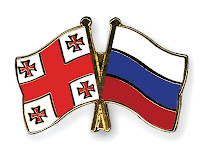 Last week, the Chamber which had been assigned to adjudicate on the Georgia v Russia (No. 2) inter-state complaint - about the war of 2008 - relinquished jurisdiction in favour of the Grand Chamber of the European Court.

Earlier, in December 2011 the Chamber had already declared the case admissible (mainly by joining most admissibility issues to the merits, to be decided on later). A hearing had also already been held in September of that year. Of course, formally such a relinquishment to the Grand chamber can happen at any time in the proceedings as Article 30 ECHR indicates:

Where a case pending before a Chamber raises a serious question affecting the interpretation of the Convention or the Protocols thereto, or where the resolution of a question before the Chamber might have a result inconsistent with a judgment previously delivered by the Court, the Chamber may, at any time before it has rendered its judgment, relinquish jurisdiction in favour of the Grand Chamber, unless one of the parties to the case objects.

However, one may wonder why it happens at this stage. If the Grand Chamber is more suited to deal with the case, it would have made more sense to relinquish jurisdiction before hearings took place, since now a different group of judges will have to assess the facts and the law. Could it be that the case does after all raise serious questions of interpretation or are rather serious questions of political sensitivity at stake, for which a Grand Chamber judgment might be a more suitable vehicle, considering its greater weight and importance? One consideration might be that this means that the judgment cannot be challenged later on, since the Grand Chamber is the last port of call in the Strasbourg system. In any event, the case of high importance has now been dragging on for over 3.5 years, certainly not a record yet, but now that the Grand Chamber will take over more patience will be needed before a final judgment is rendered.
Geplaatst door Antoine Buyse