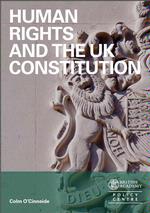 Colm O'Cinneide of University College London has written the report 'Human rights and the UK constitution', commissioned by the British Academy for the Humanities and Social Sciences. In the author's own words, it 'makes the argument that the existing relationship between UK law and the ECHR is entirely compatible with constitutional principles and any future reform of UK law in this area should keep Convention rights incorporated in UK law.' This is the short summary:

Human rights law has been the subject of considerable controversy in the UK over the last few years. For example last year’s ruling by the European Court of Human Rights (ECHR) that the UK government should end its blanket ban on prisoners voting, once again raised the thorny issue of the UK’s relationship with the European Court and whether the UK should have its own Bill of Rights. The issue of human rights appears frequently within the media and often causes heated debate with the question of the UK’s relationship to the ECHR causing some of the more fervent aspects of the debate.


In Human rights and the UK constitution Colm O’Cinneide clarifies some of the key issues at stake. He evaluates the workings of the UK human rights law, and the nature of the relationship between the ECHR and the UK courts and the Parliament. Finally, the report explores how proposals for a new Bill of Rights may affect the protection of human rights within the framework of the UK’s unwritten constitution.

Human rights and the UK constitution finds that the current state of human rights law in the UK strikes a good balance between respect for democracy and the need to protest human rights. Attempting to recalibrate this delicate balance may prove to be a difficult and thankless task.