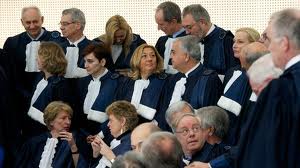 Albert Sánchez Graells (University of Hull), has published a working paper on SSRN, entitled 'The EU’s Accession to the ECHR and Due Process Rights in EU Competition Law Matters: Nothing New Under the Sun?'. This is the abstract:


The basic contention of the paper is that, given the specific architecture of the EU competition law enforcement system under Regulation 1/2003 (and the domestic competition laws of Member States) — which have crystallized in a network of highly specialised and independent administrative agencies that, generally, offer procedural guarantees equivalent (or superior) to those of most tribunals in other areas of the law — and as long as an effective (soft or marginal) judicial review mechanism is available to the undertakings affected by sanctions due to EU competition law infringements, no significant changes are required in order to make the system comply with Articles 6(1) ECHR and 47 EUCFR. This position is further supported by the express normative assumption that undertakings (or companies) deserve a relatively more limited protection than individuals under the ECHR and, more specifically, under Article 6(1) ECHR — at least as regards non-core due process guarantees, such as the standard of review applicable (and as opposed to ‘core’ due process guarantees such as the presumption of innocence, the principle of equality of arms, the right to have full access to the evidence, or the right not to suffer undue delays).


Tobias Lock of the University of Surrey School of Law, has published 'End of an Epic? The Draft Agreement on the EU's Accession to the ECHR'  in this year's Yearbook of European Law, also on SSRN. This is the abstract:


This contribution aims to analyze and assess the draft agreement on the European Union’s (EU) accession to the European Convention on Human Rights (ECHR). The paper first discuss the effects which accession will have on the system of human rights protection under the ECHR focusing on the most relevant features of the accession agreement, such as the co-respondent mechanism and the prior involvement of the ECJ. The second part of this contribution explores the future status of the ECHR in the EU’s legal order. It is argued that accession will not affect the status quo of fundamental rights protection before the EU's courts or domestic courts in any material way. Nonetheless, accession is to be welcomed as it will allow for full external scrutiny by the European Court of Human Rights.

Finally, Lina Urbaitė has written 'Judicial Activism in the Approach of the European Court of Human Rights to Positive Obligations of the State', published in the Baltic Yearbook of International Law (vol. 11, 2011).
Geplaatst door Antoine Buyse