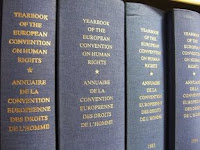 I would like to highlight two recent articles on the European Convention of Human Rights, both by professor Laurence Helfer of Vanderbilt University, who kindly drew my attention to them. The first, from the European Journal of International Law, focuses on the notion of 'embeddedness' as a guiding principle of the European human rights system. The second, recently appeared in the Harvard International Law Journal, thoroughly surveys and analyses the Court's case law on intellectual property rights. Helfer argues for a limited role of the Court on such issues. Both recommended! Abstracts below, with the full text to be found on the Social Science Research Network:

Helfer, Laurence R., "Redesigning the European Court of Human Rights: Embeddedness as a Deep Structural Principle of the European Human Rights Regime", European Journal of International Law, Vol. 19, p. 125, 2008.
The European Court of Human Rights (ECtHR) is the crown jewel of the world's most advanced international system for protecting civil and political liberties. In recent years, however, the ECtHR has become a victim of its own success. The Court now faces a docket crisis of massive proportions, the consequence of the growing number of states subject to its jurisdiction, its favourable public reputation, its expansive interpretations of individual liberties, a distrust of domestic judiciaries in some countries, and entrenched human rights problems in others. In response to this growing backlog of individual complaints, the Council of Europe has, over the last five years, considered numerous proposals to restructure the European human rights regime and redesign the European Convention on Human Rights (ECHR). This article argues that these proposals should be understood not as ministerial changes in supranational judicial procedure, nor as resolving a debate over whether the ECtHR should strive for individual or constitutional justice, but rather as raising more fundamental questions concerning the Court's future identity. In particular, the article argues for recognition of ‘embeddedness‘ in national legal systems as a deep structural principle of the ECHR, a principle that functions as a necessary counterpoint to the subsidiary doctrine that has animated the Convention since its founding. Embeddedness does not substitute ECtHR rulings for the decisions of national parliaments or domestic courts. Rather, it requires the Council of Europe and the Court to bolster the mechanisms for governments to remedy human rights violations at home, obviating the need for individuals to seek supranational relief and restoring countries to a position in which the ECtHR's deference to national decision-makers is appropriate.