Another Victory for the Freedom of Assembly 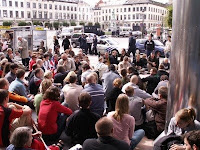 Last Thursday the Court found a violation of the right to the freedom of assembly (Article 11 ECHR) in the case of Sergey Kuznetsov v. Russia. The case concerned a small-scale peaceful demonstration in 2003 in front of the Sverdlovsk Regional Court building. The demonstrators distributed leaflets concerning the alleged corruption of the Court's president. The demonstration itself occurred without any problems, but the applicant was subsequently fined for violating the law on demonstrations (he had filed an application 8 days instead of the required 10 days in advance), for obstructing the passageway to the court and for demonstrating with another aim than the one he had asked permission for (slander of the court's president instead of uttering concern about general problems of judicial protection).

What is interesting is that the European Court found a violation, even though the applicant himself had obviously violated the time limits under domestic law. This is another example of the European Court pointing out to domestic authorities that they should not be overly formalistic. One should bear in mind that the specific context of the case led the Court to this conclusion: it was decisive that the applicant's violation of the notification deadline did not prevent the authorities from properly preparing for the demonastration (such as organsing police presence). The demonstration itself was peaceful, did not block the entry to the Court, and did not amount to defamation, incitement to violence or the rejection of democratic principles.

With this judgment the Court continues the line in its case law of 2007 by putting the emphasis on the practical elements of the right to freedom of assembly at the expense - and rightly so, I would say - of purely formalistic notions.

(And just to be clear: the photograph is of another demonstration).
Geplaatst door Antoine Buyse