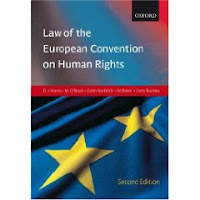 The eagerly awaited second edition of one of the classic books on ECHR law has been published this month: Harris, O'Boyle & Warbrick: Law of the European Convention on Human Rights. The book, published by Oxford University Press, has been revised in all its aspects as compared to the 1995 original. Two authors, Edward Bates and Carla Buckley, have joined the team of editors to compile this important new version which has been brought up to date to include ECHR case law until 2008. No small feat for the authors, since the years since the first edition have seen a true explosion of the Court's case law both in scope and in quantity. Strongly recommended, both for students, teachers, and practitioners!

Please note: although the Oxford University Press website indicates that the book is not yet published, it was already for sale in some UK bookshops last week!
Geplaatst door Antoine Buyse