Three New PACE Reports on the ECHR and the Court 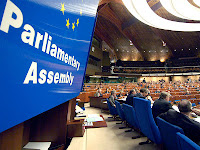 Last week, the Committee on Legal Affairs and Human Rights of the Council of Europe adopted three reports on the ECHR and on the European Court of Human Rights. Two of them were presented by rapporteur Marie-Louise Bemelmans-Videc, her last as member of PACE:

* Guaranteeing the authority and effectiveness of the European Convention on Human Rights.In a press conference the rapporteur pointed at the problems facing the Court and specifically at the lack of funds to tackle all issues effectively:

"The yearly cost of a judge at the European Court of Human Rights is higher than the annual contribution made by 15 member states. The total budget of the Court, €58.96 million in 2011, is far less than the budget of the EU Publications Office and less than a quarter of the budget of the Court of Justice of the EU, with a total of 1,230 completed and 2,284 pending cases in 2010, compared to 41,183 applications decided by the Strasbourg Court and 139,650 pending applications. The present situation is simply untenable, not to say suicidal."

The report reiterates some of the known concerns and possible solutions, such as an increased role for national parliaments to oversee national implementation of the European Court's judgments and a continuation of the Court's current poicy to prioritise the most important cases. The third key point is the report is a call on the Committee of Ministers to reinforce the interpretative authority of the Court. I reproduce here in full the conclusions of the report, which incidentally also states that the state parties to the ECHR should not be "tinkering with peripheral issues such as compulsory legal representation and the possible introduction of court fees before the Court" - A nicely phrased boomerang to the criticism that the Court should not indulge in issues peripheral to human rights. Here are the conclusions:

58. Primary responsibility for applying Convention standards lies with domestic courts and authorities; the Strasbourg Court should play a secondary role. This is embodied in the principle of subsidiarity. It is understood that states, in most instances, provide a higher level of protection than the “common European standard” guaranteed by the Court in Strasbourg, and their national authorities are accorded a certain latitude in the implementation of Convention rights, on the understanding that it is the Strasbourg Court which has the final say in cases brought before it: Articles 19, 32 and 46 of the Convention.

59. The statistics, in Strasbourg, look somewhat alarming. The stock of pending applications before the Court stands at 160,000, and the volume continues to rise by over 10% per year. The Committee of Ministers had 9,922 cases pending before it at the end of 2010. But of the pending cases, only some 13% of these were “leading” cases, i.e., those identified as revealing new systemic/structural problems requiring the adoption of new general measures. The rest, amounting to 87%, are in principle clone or repetitive cases. That said, it is it is evident, as indicated by the Court’s Registrar, that the “root problem... is simple and well known: there are too many applications coming to the Court compared to its current capacity.” Numerous attempts to reform the system in Strasbourg have not been able to ebb the overwhelming tide of new applications, diminish the Court’s backlog or, so it is claimed, to create a sustainable system that will continue to be effective in the future. In this respect, it has been argued that even Protocol No. 14 has a Assembly’s and limited, specific lifespan, being merely a tool for the temporary survival of the system while other, more appropriate solutions, are sought.

60. Two separate, and yet intertwined, issues merit priority treatment. The first concerns the need, for the Court to be given the means to regulate the filtering of applications appropriately and deal with repetitive cases (as discussed in Section 3.5 above, at paragraphs 45-51). Governmental experts should not be tinkering with peripheral issues such as compulsory legal representation and the possible introduction of court fees before the Court. The Court has taken the bold step of adopting a “priority policy” which, if implemented rigorously, will “ensure that the most serious cases and the cases which disclose the existence of widespread problems capable of generating large numbers of additional cases are dealt with more rapidly.” By taking this decision, the Court has, in effect, provided “breathing space” to those engaged in the reform process, and will permit all concerned to re-focus discussion away from the obsessive concern with the rising backlog of applications before the Court and instead grapple with problems of “persistent defaulters” in which serious human rights problems exist. The future of the Convention system is in our hands, collectively, and not only in those of the Court. It is therefore principally for member states, their executive, judicial and parliamentary authorities to guarantee the authority and long-term effectiveness of the European Convention of Human Rights.

The report also includes an extremely useful range of detailed references to the Assembly's earlier work on the issue and relevant literature and even kindly mentions this blog several times!

* Ad Hoc judges at the European Court of Human Rights: an overview.This report is a very extensive tour d'horizon of the current rules and practice on ad hoc judges, including a comparison with ad hod judges in other international judicial institutions. The footnotes include a wide range of relevant literature for those particularly interested: a good starting point for further research. And for curious readers: one of the appendices is a list of all current ad hoc judges per country.

And a third one by rapporteur György Frunda:

Considering the precarious situation of numerous national minority groups in Europe, the Assembly considers that it is time to reconsider its previous proposal concerning the adoption of an additional protocol to the European Convention on Human Rights, which could reinforce the standing of national minorities, both individuals and/or groups, before the European Court of Human Rights and provide them substantive and justiciable rights.