PACE Resolution on Authority and Effectiveness of ECHR 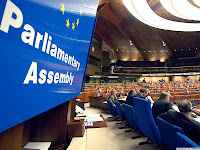 Yesterday, the Parliamentary Assembly of the Council of Europe (PACE) adopted the report 'Guaranteeing the authority and effectiveness of the European Convention on Human Rights', on which I earlier blogged here in November. The accompanying resolution (No. 1856) calls, as by tradition one can almost say, for enhanced national (parliamentary) oversight. I reproduce it here in full:

1. The Parliamentary Assembly pays tribute to the extraordinary contribution that the European Court of Human Rights (“the Court”) has made to the protection of human rights in Europe. In so doing, it recognises the subsidiary nature of the supervisory mechanism established by the European Convention on Human Rights (ETS No. 5, “the Convention”), notably the fundamental role which national authorities, namely governments, courts and parliaments, must play in guaranteeing and protecting human rights.

2. The Assembly reiterates that the right of individual application, which lies at the heart of the Convention machinery, has to be preserved in essence, and that the Court must be in a position to dispose of applications within a reasonable time, while maintaining the quality and authority of its judgments. It follows that priority must be given to difficulties encountered in states which do not appropriately implement Convention standards. Therefore, the Court should be encouraged to continue to prioritise cases in line with its recently adopted policy.

3. From this, it transpires that, in order to ensure the long-term effectiveness of the Convention system, there is a need to strengthen and enhance the authority of Convention rights at the national level (including the res interpretata authority of the Court’s case law), to improve the effectiveness of domestic remedies in states with major structural problems, and to ensure rapid and effective implementation of the judgments of the Court. National parliaments can play a key role in stemming the flood of applications submerging the Court by, for instance, carefully examining whether (draft) legislation is compatible with Convention requirements and by ensuring that states promptly and fully comply with the Court’s judgments.

4. In this connection, the Assembly reiterates its call for parliaments to establish appropriate internal structures to ensure rigorous and regular monitoring of states' compliance with international human rights obligations (Resolution 1823 (2011) “National parliaments: guarantors of human rights in Europe”) and, in particular, effective parliamentary oversight of the implementation of the Court’s judgments (Resolution 1516 (2006) on the implementation of judgments of the European Court of Human Rights, paragraph 22.1).

5. As the post-Interlaken debate on the future of the Convention system does not sufficiently take into account the role of parliaments (Resolution 1823 (2011), paragraph 5.2), the Assembly, as well as national parliaments, must ensure that they are provided with an opportunity to scrutinise reports which member states have been required to submit to the Committee of Ministers on national implementation of relevant parts of the Interlaken and Izmir Declarations.

6. Finally, the authority and effectiveness of the Convention system are contingent on the political will and commitment of member states to provide the Organisation with the appropriate financial means to implement its human rights mandate. The difficult budgetary predicament in which the Council of Europe finds itself must be given urgent attention in member states, especially the legislative branches of state authority, given the latter’s decisive role in the determination of state budgetary appropriations.