Article on Margin of Appreciation by Judge Spielmann 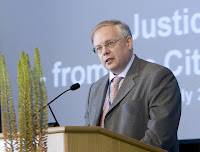 Judge Dean Spielman, one of the section presidents at the European Court of Human Rights, has written a working paper in the series of the Centre for European Legal Studies of the University of Cambridge. It deals with the issue of the margin of appreciation, more topical than ever in the context of the upcoming Brighton conference about the European Court. The paper is entitled 'Allowing the Right Margin. The European Court of Human Rights and the National Margin of Appreciation Doctrine: Waiver or Subsidiarity of European Review?'. This is the abstract:

The doctrine of the national margin of appreciation is well established in the case-law of the European Court of Human Rights. In applying this essentially judge-made doctrine, the Court imposes self-restraint on its power of review, accepting that domestic authorities are best placed to settle a dispute.

The areas in which the doctrine has most often been applied will be presented here, looking at various examples from case-law. After a brief overview of the doctrine’s origin, the analysis will focus on the situations in which the margin has been allowed or denied. Does it relate merely to factual and domestic-law aspects of a case? What is the scope of the margin of appreciation when it comes to interpreting provisions of the European Convention on Human Rights? What impact does an interference (whether disproportionate or not) with a guaranteed right have on the margin allowed? Is there a second-degree or “reverse” margin of appreciation, whereby discretionary powers can be distributed between executive and judicial authorities at domestic level? Lastly it is noteworthy that Protocol No. 14, now ratified by all Council of Europe member States, enshrines in Article 12 – at least to some extent – an obligation to apply a margin of appreciation.

One essential question remains: by allowing any margin of a certain width, is the European Court simply waiving its power of review or is it attributing responsibility to the domestic courts in the interest of a healthy subsidiarity?