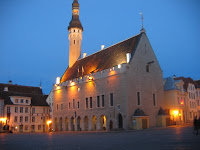 From May 30 to June 2, 2012 Tallinn will be the host city of the Congress of the International Federation of European Law (FIDE). This will be the 25th time that the biennial FIDE Congress is serving as a common forum for European legal scholars and practitioners to address current issues of interest in European Union law and its interaction with national law:

FIDE (Fédération Internationale pour le Droit Européen, the International Federation for European Law) focuses on research and analysis of European Union law and EU institutions, and their interaction with the legal systems of the member states. FIDE unites the national associations for European law of all EU member states and candidate countries, as well as Norway and Switzerland. It provides legal scholars and practitioners with a common forum to address current issues of interest in European law and in the interaction between EU and national law.

The Congress is expected to attract some 500 lawyers from across Europe and beyond, including the President of the Court of Justice of the European Union. The Congress lasts three days and the working languages are English, French and German.

One of the three main topics of the 25th FIDE Congress is:

More information can be found on the website of FIDE.
Geplaatst door Antoine Buyse