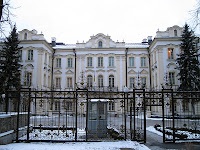 Yesterday, the Court issued its judgment in the case of Oleksandr Volkov v Ukraine, a politically very sensitive case about the dismissal of the applicant as Supreme Court judge. The facts of the case would not be out of place in a book by Kafka. The Court found a number of violations, but the most remarkable is that - and this is very rare - it indicated very specifically how the violation should be remedied: Mr Volkov should be reinstated in his post as judge as soon as possible. Here is the press release about the case from the European Human Rights Advocacy Centre headed by professor Philip Leach who represented the applicant in the case in Strasbourg:

Today, in the case of Volkov v Ukraine (No. 21722/11), the European Court of Human Rights found Ukraine to have violated the rights of Oleksandr Volkov, who was dismissed from his post as a Supreme Court judge in May 2010 due to an alleged “breach of oath”. The Court found violations of the right to a fair trial and respect for private life and ordered Ukraine to reinstate him immediately as a Supreme Court judge, the first time the Court has made such an order. Mr Volkov was represented by the European Human Rights Advocacy Centre (EHRAC) based at Middlesex University.


Mr Volkov was appointed as a Supreme Court judge in 2003. In 2008, proceedings were brought against him before the High Council of Justice for alleged professional misconduct, and he was consequently dismissed by the plenary parliament from his post in 2010 for “breach of oath”. Mr Volkov appealed unsuccessfully to the Higher Administrative Court against his dismissal.

In its judgment, the Court found four separate violations of the right to a fair hearing (Article 6(1)). Firstly, the bodies which considered Mr Volkov’s case were not independent and impartial. There were ‘structural deficiencies’ in the proceedings before the High Council of Justice, a number of whose members were also found to be personally biased. The hearing of the case by Parliament “only served to contribute to the politicisation of the procedure and to aggravate the inconsistency of the procedure with the principle of the separation of powers”. These defects were not considered to have been remedied during the review of the case by the Higher Administrative Court. Secondly, the principle of legal certainty was breached because there was no limitation period relating to the proceedings against Mr Volkov. Thirdly, the principle of legal certainty was also violated because, during the plenary meeting of Parliament, “the MPs present deliberately and unlawfully cast multiple votes belonging to their absent peers”, which violated the Ukrainian Constitution and other legislation. Fourthly, the chamber of the Higher Administrative Court was not considered to be a ‘tribunal established by law’ because its president had continued to perform the duties of president after the expiry of the relevant statutory time limit.

The Court also found a violation of Article 8 of the Convention because Mr Volkov’s dismissal from the post of judge did not comply with the domestic law and also because the law was arbitrary.

The Court ordered the Ukrainian authorities to reinstate Mr Volkov in the post of Supreme Court judge “at the earliest possible date”.

Significantly, the Court found “serious systemic problems as regards the functioning of the Ukrainian judiciary” and ordered Ukraine to carry out reform of the system of judicial discipline, including legislative reform.

Prof. Philip Leach commented: “We are delighted by this decision. Mr Volkov was the victim of endemic political corruption, which this judgment confirms is prevalent in Ukraine. It is significant that the European Court has, for the first time, ordered the reinstatement of someone who was unfairly dismissed. This judgment confirms that the Ukrainian legal system is in urgent need of fundamental reform.”