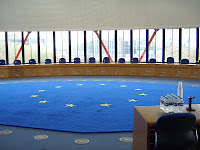 Yesterday, the Committee of Ministers had Protocol 15 and the explanatory report on its agenda. It decided to transmit the draft Protocol to the European Court and to the Parliamentary Assembly to get their opinions on it. This may mean that the state delegates now agree on the text.

Relevant documents of the Steering Committee, including all the ones mentioned above, can be found here.
Geplaatst door Antoine Buyse