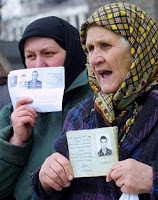 These judgments can be added to a growing number of disappearances cases - a sad reminder of the pervasiveness of the problem. There are many aspects of note in the most recent ones, but I would like to single out four:

- First, the establishment of the facts. Since Russia appearantly failed to offer plausible explanations for the disappearances or furnish the Court with full documentation, the Court accepted the applicants version of the facts. These cases are, from that perspective, clear examples of states burning their own fingers by not cooperating with the Court during the proceedings.

- Secondly, four of these cases present a novelty in Strasbourg's dealing with the Chechnyan context. They are the first ones to be dealt with under expedited review. Under rule 41 of the Rules of Court, the Court can make exceptions to the ordinary, chronological order of dealing with cases. If anything, this is a sign of the growing awareness of the urgency of disappearance cases.

- Thirdly, as was kindly pointed out to me by my Utrecht University colleague Marthe Lot Vermeulen - an expert on enforced disappearances - some of these cases, e.g. Imbragimov and others, are an important confirmation of the Court's evolving case law on the victim status of family of the disappeared. In the seminal case of Kurt v. Turkey (1998), the mother of a disappeared person was recognised as a victim. In the later case of Orhan v. Turkey (2002), the Court held that this finding did not imply that any family member automatically was a victim under the Convention. In Orhan, the Court elaborated on relevant criteria for deciding on this issue (see especally para. 358). Applying those criteria in the recent Chechen cases, the Court held that not just parents of disappeared, but also siblings were victims of a violation of the prohibition of inhuman treatment (Article 3 ECHR). For those interested in comparative law, it might be interesting to take a look at the practice of the Inter-American Court of Human Rights. Of special relevance for the issue at hand, is the Court's formal (November 2007) interpretation of its earlier judgment in the case of La Cantuta v. Peru. The interpretation contains an elaborate analysis of the notion of "victim", including a highly interesting concurring opinion of judge Cançado Trinidade with references to Goethe and Pascal!

- Finally, one may wonder when the Court will conclude that the problem of disappearances is a structural one in Chechnya, calling for more general measures on the part of the State. In Ibragimov, we now only find this somewhat subdued statement (para. 84): 'The Court notes with great concern that a number of cases have come before it which suggest that the phenomenon of “disappearances” is well known in the Chechen Republic.'

In four of the five cases, the applicants were assisted in bringing their applications by the NGO Russian Justice Initiative. For its press release, see here. More information on earlier Court rulings in Chechen cases can be found on their website. In the fifth case, Betayev and Betayeva, another NGO, Memorial, gave assistance and advice to the applicants. For a very elaborate analysis of the legal and factual context of the dissappearances issue, see the 2005 Human Rights Watch report Worse than a War.

To be continued soon: on 12 June, the Court will issue judgments in two other disappearance cases from Chechnya.
Geplaatst door Antoine Buyse