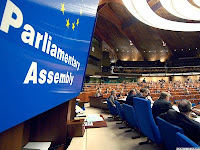 Yesterday, the Legal Affairs Committee of the Parliamentary Assembly of the Council of Europe (PACE) adopted its newest (7th) report on the implementation of the judgments of the European Court of Human Rights, drafted by Mr Christos Pourgourides. The report fits in with the increasingly active role of PACE in the last few years to supplement the work of the Committee of Ministers, which formally supervises the implementation of the Court's judgments on a case-by-case basis. The Assembly rather focuses on large-scale issues and thus highlights in this report nine countries which show "extremely worrying delays in implementation": Bulgaria, Greece, Italy, Moldova, Poland, Romania, the Russian Federation, Turkey and Ukraine. One may note, by the way, that these delays are all the more problematic since this list of countries includes all the countries from which most applications come to Strasbourg. A number of outher countries are also in the 'danger zone' and deserve attention: Albania, Armenia, Azerbaijan, Bosnia-Herzegovina, Georgia and Serbia.

Specifically, the following grave problems endangering the rule of law are discussed in the report:

Less problematic, but also mentioned are Portugal and the United Kingdom, where the rapporteur sees some slow but positive developments. The very detailed report is an invaluable resource to see how implementation fares in some of the more problematic state parties to the ECHR.
Geplaatst door Antoine Buyse