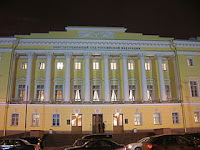 The president of Russia's Constitutional Court, Valery Zorkin, uttered very critical remarks at a forum in Saint Petersburg last Saturday. According to various press agencies (Itar Tass and Reuters) and newspapers (Kommersant) he indicated that Russia could withdraw from the jurisdiction of the European Court of Human Rights. This follows statements by the Constitutional Court that it wants to introduce mechanisms to protect national sovereignty which would permit national authorities not to execute ECtHR judgments if they would be contrary to the Russian Court's judgments. All of this takes place after criticism in Russia of the Strasbourg Court's findings of human rights violations in a whole series of cases in the last few years and more specifically the recent judgment in Markin, a case in which the European Court found that Russia violated the ECHR by discriminating against male soldiers asking for parental leave, a case originally decided by Mr Zorkin's Constitutional Court. In addition, the judgment in the politically very sensitive Yukos / Khodorkovski / Lebedev case is forthcoming.

One may add, that anonymous sources within the Kremlin immediately played down Zorkin's remarks and qualified it as a "backwards step".
Geplaatst door Antoine Buyse