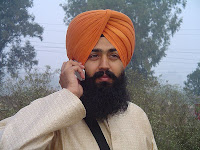 The wearing of religious clothing is a topical issue in many European countries. This month, the Court declared inadmissible the complaint of a Sikh, in Mann Singh v. France. The applicant had tried to obtain a duplicate driving licence after the original had been stolen. His request was refused, because he did not want to pose for the identity photographs without his turban (Sikh men are required to wear a turban at all times), although the applicable rules required that a person should be "bareheaded and facing forward" on an identity photograph. The reasoning of the applicant that this had not been necessary in earlier years, was not accepted.

The European Court of Human Rights found that the French requirement interfered with Mann Singh's freedom of religion, but that it was provided by law and served the legitimate aim of ensuring public safety. In this context it was necessary for the authorities to be able to identify persons under road traffic regulations to check whether someone was authorized to drive. Referring to earlier case law, it held that the details of such national arrangements fell within a state's margin of appreciation. It also noted, that the requirement was a sporadic one. The earlier cases to which the Court refers are Phull v. France (Sikh in airport security check), El Morsli v. France (muslim woman in consulate of France in Morocco, in context of identity check), and Karaduman v. Turkey (identification in order to receive university diploma).

One can conclude from all of these cases, that - unless manifestly unreasonable or disproportionate - ECHR state parties can go against people's own religious rules for the purposes of necessary identification which serves a legitimate aim.

Although the applicant also invoked the right to privacy and the prohibition of discrimination, the Court did not find any appearance of a violation of those provisions. The decision itself is available only in French, but the press release in English can be found here.
Geplaatst door Antoine Buyse