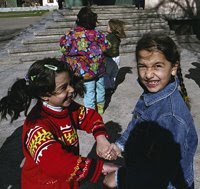 After the Czech Republic and Greece, it was Croatia's turn last week to be faced with a complaint of unequal treatment of Roma in schools. In the case of Orsus and others v. Croatia, the European Court of Human Rights addressed the issue of Roma-only classes in several Croatian elementary schools.

The fourteen applicants were Roma children who had been placed in separate classes and had spent part of or even their entire primary school time in such separate classes. Most of the applicants did participate in extra-curricular activities, in which the groups were mixed. They claimed that the separation amounted to racial discrimination, that the courses in the Roma-only classes had 30% less content and that the separation caused psychological harm. They also pointed to the extremely high rate of Roma drop-outs in primary schools (84% as compared to 9% as a national average). The state contended that the separate classes were meant for pupils who lacked sufficient knowledge of Croatian. In addition, they submitted that in most of the schools concerned less than half of Roma children were placed in separate classes.

The applicants complained that the separation amounted to inhuman and degrading treatment, since it caused them psychological harm. The Court conceded, in an important dictum, that this could in principle be the case (para. 38):

The Court does not in principle exclude that treatment based on prejudice against an ethnic minority may fall within the ambit of Article 3 ECHR. In particular, the feelings of inferiority or humiliation triggered by discriminatory segregation based on race in the field of education could, in the exceptional circumstances of an individual pupil, amount to treatment contrary to the guarantees of Article 3 of the Convention.

In the case at hand, however, the applicants had failed to substantiate that prevalent prejudice against them existed. Thus the Court found no violation of Article 3. A real Echternach procession outcome: two steps forward and one step back. For many future applicants, it will be difficult, although not impossible, to prove such prejudice against them.

The core of the case was the complaint under Article 2 of Protocol No. 1 (right to education) combined with Article 14 (prohibition of discrimination). The Court found no proof that the education in the Roma-only was of a lower standard. In addition, it found that transfers to mixed classes were a regular practice (including some of the applicants' cases). There was no indication that the parents of the other applicants ever asked for a transfer to the mixed classes. The children were thus not prevented from receiving "an adequate and sufficient education". The Court explicitly distinguished the case from the earlier Czech case of D.H. and others. In paragraph 65 it held:

In the Court's view placing a disproportionate percentage of children belonging to a specific ethnic minority in schools for the mentally retarded bears no comparison with placing Roma children in separate classes on the ground that they lack adequate knowledge of the Croatian language.

The Children were kept in the same schools and class transfers were possible. Although there was no clear set of standards and procedures, these shifts were without formalities and based on a teacher assesment of the individual child. Interestingly, the Court did indicate that having such standards and procedures would be "desirable" - which is less strongly formulated than in the Greek education case of June 2008.

Finally (para. 68), the Court concluded that:

The Court finds it satisfying that the authorities invested themselves in addressing that sensitive and important issue, and that the placement of the applicants in separate classes was a positive measure designed to assist them in acquiring knowledge necessary for them to follow the school curriculum. Thus the Court considers that the initial placement of the applicants in separate classes was based on their lack of knowledge of the Croatian language and not their race or ethnic origin, and was justified for the purposes of both Article 14 of the Convention and Article 2 of Protocol No. 1.

The Court's press release of the case can be found here. The European Roma Rights Centre, one of the NGOs representing the applicants, issued a press release of its own, deploring the outcome as a setback for Roma rights.
Geplaatst door Antoine Buyse