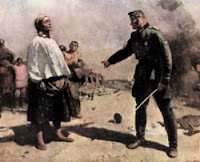 It is relatively rare, but sometimes echoes of crimes committed during World War II reach the Strasbourg Court. In such instances the Court is called upon to look into atrocities which themselves gave rise to the drafting of the Convention and the creation of the Court. This week, the Court issued a judgment in such a case, Kononov v. Latvia. It found, with the smallest of margins (four votes against three), a violation of Article 7 ECHR.

Article 7(1) provides that "no one shall be held guilty of any criminal offence which did not constitute a criminal offence under national or international law at the time when it was committed." Kononov was found guilty of having committed war crimes in Latvia in 1944. At that time he led a unit of partisans who killed several villagers in Latvia who had allegedly collaborated with the Nazis. The Latvian authorities started to prosecute Kononov in the late 1990s, which was still possible because war crimes were exempted from any statutory limits. Kononov complained that his actions were, in 1944, not contrary to the law.

In order to solve the case, the Court had to assess whether the applicant's actions contravened international humanitarian law, specifically the appended Regulations to the Hague Convention of 1907. It concluded that the partisans had had legitimate grounds to consider the villagers as collaborators of the German army and that they were indeed armed by the latter. Thus the persons killed could not reasonably be considered as civilians. In addition, domestic law could not serve as a basis for his conviction. Thus the Court found a violation of Article 7 ECHR.

Much more than in the cases concerning the war in Chechnya, the Court had to interpret the specifics of international humanitarian law (IHL) in this case. This obviously led to much discussion, if one considers that one concurring and two dissenting opinions are attached to the judgment. I leave it to experts of IHL to assess whether the Court did a commendable job here.

The case was highly sensitive, since it touched upon the Second World War and especially since the applicant was a former Latvian and was granted Russian citizenship during the criminal proceedings in Latvia. Those familiar with the situation in the Baltic countries, may know that one of the major bones of contention between Latvia and Russia in the last few years is the issue of non-citizenship for the Russian minority in Latvia. In the case of Kononov, Russia intervened as a third party. It may have come as a relief to that state that the Court found in favour of a Russian citizen in a case which was not directed against Russia itself (as opposed to the Chechnyan cases).

Today the judgment itself was not yet available through the Court's search engine HUDOC (a sign that the Court's summer recess is approaching?), but the press release can be found here. In addition, click here for the admissibility decision (in French only).
Geplaatst door Antoine Buyse